The 16th President of the United States, serving from March 1861 until his assassination in April 1865. Lincoln led the United States through its Civil War—its bloodiest war and its greatest moral, constitutional, and political crisis. In doing so, he preserved the Union, abolished slavery, strengthened the federal government, and modernized the economy.

Base on his past record of failures, Abraham Lincoln had no right to think he could win the Presidency of the United States.  But that did not keep him from trying.

Lincoln has been consistently ranked both by scholars and the public as one of the three greatest U.S. presidents. 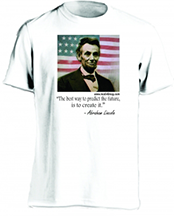 Buy now
By the time Lincoln was inaugurated in March 1861 seven southern states had seceded from the Union and formed the Confederate States of America. After Lincoln ordered a fleet of Union ships to supply South Carolina’s Fort Sumter in April, the Confederates fired on both the fort and the Union fleet, beginning the Civil War. Lincoln issued a preliminary Emancipation Proclamation, which took effect on January 1, 1863.

Abraham Lincoln began receiving death threats almost as soon as he took office, and didn't have the luxury of modern Secret Service protection.

In his second inaugural address, delivered on March 4, 1865, Lincoln addressed the need to reconstruct the South and rebuild the Union: “With malice toward none; with charity for all.” Tragically, Lincoln would not live to help carry out his vision of Reconstruction. On the night of April 14, the actor and Confederate sympathizer John Wilkes Booth slipped into the president’s box at Ford’s Theatre in Washington and shot him point-blank in the back of the head. Lincoln was carried to a boardinghouse across the street from the theater, but he never regained consciousness, and died in the early morning hours of April 15.

The Lincoln Memorial is located in Washington DC

There is no one that has had the opportunity to visit the Lincoln Memorial that does not feel that the man is alive right in front of you. It is a must see for all Americans. Henry Bacon was the New York architect who designed the Lincoln Memorial, which stands at the west end of the National Mall as a neoclassical tribute to the 16th President of the United States. The construction of the memorial took eight years to complete, from 1914-1922.